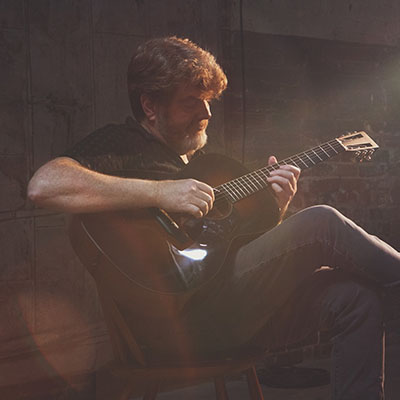 A master storyteller, Mac is the writer behind hits “Back Where I Come From,” “All These Years” and “Down the Road.” When he performs, he introduces each song with anecdotes, describing how the songs came to be and how they have impacted his life. Mac’s wit and love for life and music shine throughout his incomparable career.

Music was the most obvious road for Lyman “Mac” McAnally to take from his Red Bay, Alabama birthplace and Belmont, Mississippi hometown. He was a guitar and piano prodigy who performed in clubs at 13, wrote his first song at 15 and landed as a Muscle Shoals studio musician at 18. Mac signed his first record deal with Ariola at 20 and launched two singles to moderate success on the Billboard Hot 100. “It’s A Crazy World” peaked at No. 37 and “Minimum Love” topped out at No. 41.

His songwriting drew the attention of Jimmy Buffett and Hank Williams, Jr., both of whom cut McAnally songs. Alabama took his “Old Flame” to No. 1 in 1981. The song cemented his status as a hitmaker, a reputation that has never waned. Reba McEntire, Kenny Chesney, Zac Brown Band and Brad Paisley are just some of the artists who cut Mac’s songs over the next 20 years.

In the late ’80s and ’90s Mac became an in-demand producer, along the way working with Ricky Skaggs, Chris LeDoux and Little Feat, among others. He produced the band Sawyer Brown through their biggest successes and penned their signature hits including “Cafe On The Corner,” “All These Years” and “Thank God For You.”

Meanwhile, Mac’s skills as a musician continued to bring calls that carried him into the studio. Over the course of his career he’s built an enviable registry of credits that includes Toby Keith, Roy Orbison, George Strait, Amy Grant and many more. He joined Buffett’s touring Coral Reefer band, an association that continues to this day. Mac has also produced several of Buffett’s albums and written many of his songs.

In 2007 Mac was inducted into the Nashville Songwriters Hall of Fame. The following year, the Mississippi Musicians Hall of Fame followed suit, while the Country Music Association named him Musician of the Year seven years in a row. Mac continues to own and operate his own recording studio in Muscle Shoals.